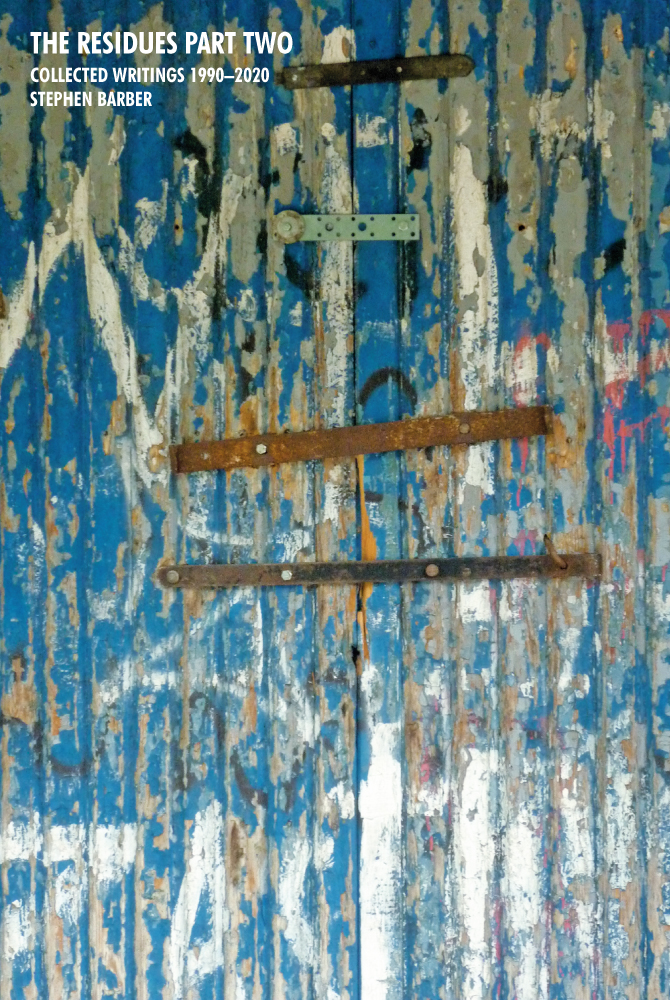 “Beginning in 1993 with Artaud: Blows and Bombs, Stephen Barber has quietly, independently forged one of the most singular and enriching bodies of work in contemporary writing.”
–David Peace

Over the three decades since 1990, Stephen Barber has written many essays and experimental writings around film and digital arts. For the first time, this collection in two parts assembles all of those writings, many otherwise unavailable, over seventy in all. Many of those writings explore unknown elements of vital bodies of work that remain inspirational for contemporary art, writing and film. Others interrogate the transmutations of cities – especially those of Europe and of Japan – across those three decades, anatomizing their urban futures.

These writings are often residues from, or accompaniments to, Stephen Barber’s thirty books, short writings which possess their own distinctive and accumulating presence, and can display the interrogative resilience to explore preoccupations with greater intensity and pointedness than an entire book. THE RESIDUES, PART TWO collects more than 30 writings on subjects including J.G. Ballard, Pier Paolo Pasolini, Donald Richie, and much more.

This website uses cookies to improve your experience while you navigate through the website. Out of these cookies, the cookies that are categorized as necessary are stored on your browser as they are essential for the working of basic functionalities of the website. We also use third-party cookies that help us analyze and understand how you use this website. These cookies will be stored in your browser only with your consent. You also have the option to opt-out of these cookies. But opting out of some of these cookies may have an effect on your browsing experience.
Necessary Always Enabled
Necessary cookies are absolutely essential for the website to function properly. This category only includes cookies that ensures basic functionalities and security features of the website. These cookies do not store any personal information.
Non-necessary
Any cookies that may not be particularly necessary for the website to function and is used specifically to collect user personal data via analytics, ads, other embedded contents are termed as non-necessary cookies. It is mandatory to procure user consent prior to running these cookies on your website.
SAVE & ACCEPT